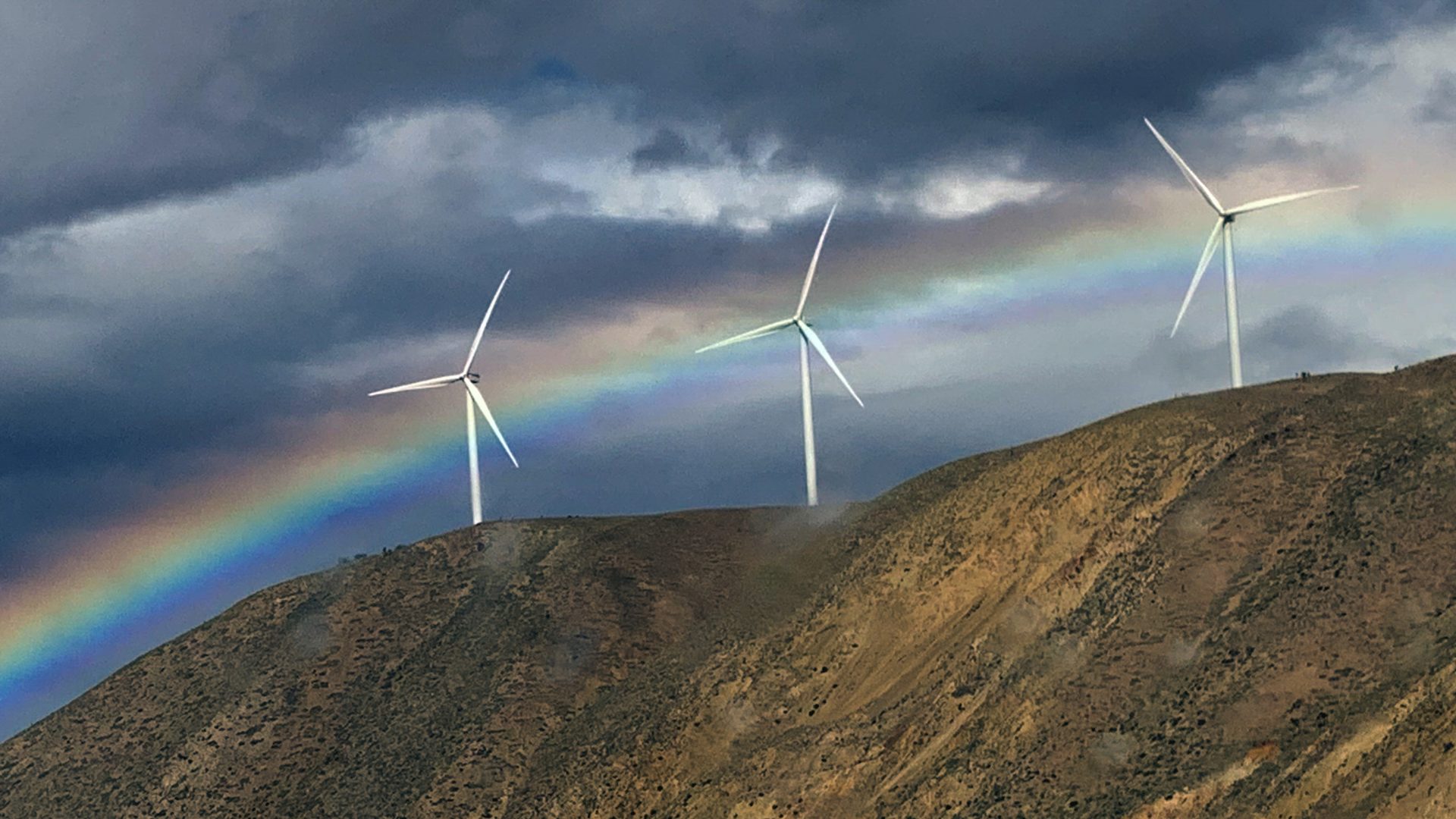 Renewable energy sources will be the world’s main source of power within two decades and are establishing a foothold in the global energy system faster than any fuel in history, according to BP. The speed of growth is without parallel, the company said in its annual energy outlook. As of October 2020 it’s official, solar is the cheapest electricity in history.

The major types of renewable energy sources are:

Renewable technologies are now on a seemingly unstoppable track towards mass market adoption around the globe, says David Borlace of Just Have a Think. Solar Power grabs all the headlines, but wind power is gaining traction as new technologies and materials allow machines of truly gargantuan proportions to be built out in our oceans. In the following video David Borlace provides an introduction to these emerging technologies:

The U.S. Energy Information Administration projects that U.S. renewable energy consumption will continue to increase through 2050. Many US cities are already proudly claiming to be running on 100% renewable energy.

Globally, renewables are also taking off. According to Deloitte Insights, “having only recently been recognized as a “mainstream” energy source, renewable energy is now rapidly becoming a preferred one. Many smart and sustainable cities (video) are cropping up around the globe.

Despite high growth rates, renewable energy still represents only a small fraction of today’s global energy consumption. The industry is only in it’s infancy.

Criticisms of Renewable Energy
Critics of renewables claim that the technology is intermittent, that infrastructure is not in pace, that it has poor eROI and that funding is lacking. They also claim that relying on renewable alone would significantly raise the cost of overhauling the energy sector.

These claims are often proposed by fossil fuel industry supporters like the current POTUS, Donald Trump, who has suggested that renewables won’t work. Others, like the World Nuclear Association are also sources of these claims. The basic problem is that the sun doesn’t always shine and the wind doesn’t always blow they say.

In his craziest speech yet, Trump said “Coal is indestructible (…) [and] what happens when the wind doesn’t blow? Well, then we have a problem. Okay good. They were putting him in areas where they didn’t have much wind, too. And it’s a subsidary [sic] — you need subsidy for windmills. You need subsidy. Who wants to have energy where you need subsidy? So, uh, the coal is doing great.”

Critics point to nuclear energy as a better and more permanent solution with infrastructure already in place. Critics also like to claim the cost is too high for renewables. However, as a society we can always seem to afford endless wars, GOP tax cuts, and banking bail outs, but not education, medicare for all, a new green deal, or renewable energy (video). We write unlimited checks for unlimited war.

Senator Bernie Sanders and Alexandria Ocasio-Cortez have recently been very outspoken about these matters. They are asking the elite, purely self-interested and narcissistic leadership for the first time why aren’t they talking about the real costs of our system, and the externalities in a matter we cannot afford not to fund because of our already failing social and personal health as well as our failing planetary health. At this point the budget lines are drawn by the morally bankrupt (video) and arguing over them is nearly moot. As you will see below the case is made below to the contrary on all of these points.

Renewable Waste & Recycling
David Borlace of Just Have a Think asks, “solar and wind energy are growing at a truly astonishing pace on every continent. But in the race for global supremacy in the power generation sector have we neglected to consider how we will deal with millions of panels and turbines when they come to the end of their useful lives? Are we storing up yet another environmental problem?” In fact, a large percentage of renewable waste is recyclable. In this video the profitable market and prospects for recycling wastes from renewables is discussed in depth.

Renewable Energy v. Nuclear Energy
Nuclear energy is being suggested as a solution to climate change by prominent and eminent scientists such as James Hansen. Proponents of nuclear claim that renewables won’t be enough as the criticisms listed above. Nuclear energy supporters conversely provide a strong rationale in support of nuclear energy as a solution to climate change. This is discussed further on the SW Nuclear Power Knowledgebase >>

In the following video with Naomi Klein, author of This Changes Everything, this ongoing debate is addressed:

Many note that James Hansen, one of the foremost advisors on climate related matters and known as the grandfather of this science, has suggested that we have to consider increasing nuclear power as a response to climate change. Naomi Klein does not agree with James Hansen’s belief that nuclear power is an important component in our collective effort to avert climate catastrophe. However, she does make a brilliant case in the other direction while pointing to renewables as a better option in a lot of her other work on this issue.

Renewables have a long, proven track record of being better, safer, and cleaner than nuclear power. They are now commercially available and getting adopted more and more by smart countries around the world.

Bhutan (video), an example for the world, is carbon negative because of it’s commitment to renewables including hydropower and wind turbines. Bhutan’s ambitious vision of 100% renewable energy supply is based on hydropower as the main source of electrical energy supply and it is inevitably linked to the adverse impacts of climate change It has also adopted negative carbon technologies such as biochar, aforestation, and more.

The True Solution to Climate Change
In the following video lecture with Mark Z. Jacobson—Director of the Atmosphere/Energy Program and professor of civil and environmental engineering at Stanford University—discusses technical and economic roadmaps to convert global energy infrastructure to 100% clean, renewable energy.

Saving energy is the most efficient, the least expensive and least invasive solution readily at hand. Additionally, conserving energy, which is less expensive than producing it, brings about numerous advantages: reduced energy expenses, job creation, and so on. Finally, renewables such as wind, solar, and hydro are much more efficient, clean, safe and climate friendly. Those who are serious about climate and social justice argue that nuclear power is a false solution to climate change and are working toward a 100% renewable energy future. Continue this discussion on the SW Wiki Renewables page.

Senior Policy Advisor for Energy Grant Smith and Vice President and EWG Editor-in-Chief Bill Walker said in a recent article that “transitioning to 100% clean, safe and renewable energy in less than two decades means quickly ending the use not only of fossil fuels, including natural gas, but also of nuclear reactors. They say an all-renewable grid would be too expensive, and there is no convincing evidence it’s feasible. [But] none of those arguments stand up.” Right now, everything in our lives could be powered by clean, renewable energy say the people working on the Solutions Project 100% Campaign for accelerating the transition to clean energy for all.

These authors ask if the nation should shoot for such an ambitious goal as to supply the entire US energy grid with reliable electricity from 100% renewable energy sources? The answer they give is, the bottom line: “Yes. But the devil is in the details, and the debate rages over how to get there.”

Further these authors review this 2015 analysis conducted by researchers at Stanford University and the University of California at Berkeley. They found that 100% wind and solar power could provide electricity to the continental U.S. more reliably than the current system by 2050, and at lower projected costs.

They further concluded that:

Low Costs of Renewables, Almost Too Low
According to Clean Technica, “the IRENA Renewable Power Generation Costs in 2017 report found that solar and onshore wind are the cheapest energy sources, reporting that in 2017 wind turbine prices had an average cost of $0.06 per kWh, though some schemes were $0.04 per kWh. The cost of solar photovoltaic (PV) had fallen to $0.10 per kWh” The problem for those profiting off of fossil fuels, coal, and nuclear power is that they actually don’t see how to profit from these inexpensive technology. This is the real problem with the cost of renewables!