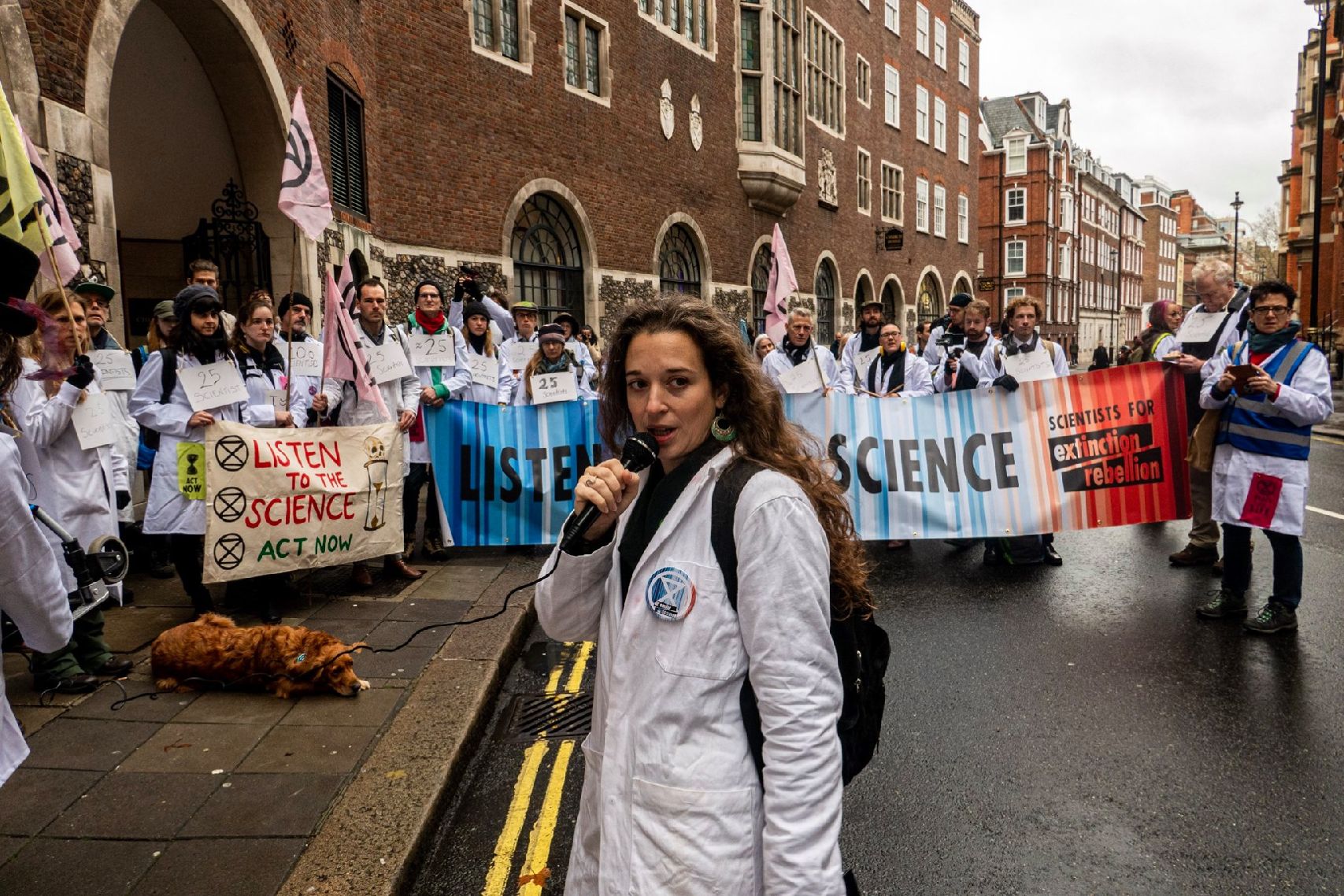 Free online book by scientist and bestselling author of Brain-fizzing Facts, Dr Emily Grossman, breaks down the science of the climate and ecological crisis to make our situation easy for adults and teenagers to understand.

Referring to the World Scientists’ Warning of a climate emergency, the book notes: “In November 2019, a group of more than 11,000 scientists from 153 countries declared “clearly and unequivocally that the Earth is facing a climate emergency” .” We are delighted that Dr. Grossman has joined our Scientific Advisory Board. Click here to watch Dr. Alison Green in conversation with Dr. Grossman.

The book is available as an open-access Google Doc

Watch Dr Grossman talking about why she wrote this book

Dr Emily Grossman, lead author of the new book, said: “Since April 2019 I’ve been on this intense journey of wanting to get to the truth and find out the facts. And the more that I’ve found the more horrified and terrified I’ve become. Everyone needs to know the truth. What we need is urgent action, but how can we persuade people to act if they don’t realise just how bad things are, how much worse it’s going to get, and how little is being done about it? Young people in particular are really starting to wake up to the fact that we’re hurtling towards a nightmare unless we do something now. They’re desperate to know the truth and what they can do to help, but without honest and accessible science messaging nothing is going to change. I couldn’t find a full overview of the situation anywhere that was really accessible and easy to follow, so I would not rest until we had written one. It’s free to access, rigorously fact-checked and referenced, and, most importantly, easy for anyone to read.”

Dr Grossman, whose bestselling children’s book Brain-fizzing Facts has just been short-listed for the 2020 Teach Primary Book Awards, has just launched Emergency on Planet Earth, a first of its kind free online book, which covers the science of what’s going on on planet today and what needs to be done about it – cutting through the jargon and speaking directly to you and to your children. Dr Grossman is one of the nation’s best-loved science experts, known for her role on TV shows such as Sky1’s Duck Quacks Don’t Echo and ITV’s The Alan Titchmarsh Show. She was determined to provide an up to date guide to the Climate and Ecological Crisis that helps adults and teenagers understand what’s going on on their doorstep and around the world, and to think clearly about how to effect real change. She enlisted the help of a range of experts and the book has already been endorsed by many leading voices in the field (see quotes below and list of expert reviewers and contributors).

The book begins boldly with the following message: “The science is clear. We are facing an unprecedented global emergency. We must act now.” It then goes on to answer every question you could have, from how we can be sure that humans are causing climate change, to how it is already affecting us right now, to what might happen in the future depending on what action we take. The book also addresses the arguments made by climate skeptics and looks at how global governments are responding to the crisis, continually returning to its core truth that: “Humanity is facing a crisis unprecedented in its history… This crisis has been caused by human activities and we have to stop making it worse or we will face catastrophe that we cannot think our way out of, invent our way out of or buy our way out of. In one way or another, it will affect every one of us and everything we love.”

The launch of Emergency on Planet Earth is far from being Dr Grossman’s only work towards informing the public about the issues our planet faces. Last year she was chosen as spokesperson for The Daily Mirror’s Climate Issue (the first ever paper to produce an entire issue on the subject), spoke at The Guardian Live’s first ever panel event on Climate Change, interviewed Sadiq Khan for Time Out magazine challenging him on London’s emissions, co-wrote and presented a Radio 4 documentary on James Hansen – the father of climate change awareness – and co-founded Scientists for Extinction Rebellion (now XR Scientists). Yet, according to Dr Grossman, this still wasn’t enough because when people told her they wanted to find out more about what’s going on on our planet, she couldn’t point them towards an easy-to-read resource that told them everything they needed to know, all in one place.

Dr Grossman added: “It’s not really surprising that a simple guide like this didn’t already exist, as the changes that are happening to our climate impact almost everything under the Sun, from changes to our weather to melting sea ice to wildlife loss to declining crop yields to increased spread of diseases. Finding out what I needed to know from each different field in order to get a complete and up to date picture felt like an almost impossible task, but fortunately I was joined by an expert team of volunteer scientists and we brought together information from every relevant field. Sometimes a single sentence crossed many different disciplines and the review process took many many months – but I can now put my hand on my heart and say that this is a book you can really trust to tell you the truth.”

The book is available as an open-access Google Doc and Extinction Rebellion have already adopted it as the science section of the non-violent activist movement’s website. Dr Grossman is clear that her work is by no means over as the online book will be updated regularly and she has already started giving talks summarising its key messages.

Comments about the book from leading experts and political voices:

“Many people have asked me if there is a reliable book or resource that tells them all they need to know about the climate and ecological crisis in an easy to understand way. Now, I can say that there is, and what’s more, it’s not behind a paywall! Scientists have for decades warned us of climate change and ecological breakdown in scholarly journals. Now those many warnings are integrated and brought to life in this excellent book. A must-read for anyone who wants to understand why we must act NOW.” @ScienceWarning, Dr. Alison Green, Executive Director of Scientists Warning, Psychologist and former Pro Vice-Chancellor of Arden University.

“A fantastic communication summary of the science of climate/ecological crises. This document represents more than a year of careful work by one of the UK’s most talented and dedicated science communicators, with the support of some of its most eminent climate scientists. It should be of immense help to journalists, educators and anyone who cares about human life on earth, but often has difficulty navigating the scientific knowledge. This is an immense step forward in creating an educated public on climate topics.” Professor Julia Steinberger, Professor of Social Ecology and Ecological Economics at the University of Lausanne and Lead Author of Working Group 3 of the IPCC 6th Assessment Report

“This is a powerful statement on the need for action, rigorously referenced and compellingly told.” @rpancost, Professor Rich Pancost, Head of the School of Earth Sciences at the University of Bristol, on Twitter

“This is a brilliantly written planet polemic, I shared it with friends who aren’t rebels and they are now conscious climate change fighters as a result of reading it!” @lucierussell12, Lucie Russell, CEO of StreetDoctors charity and co-founder of The Big Issue, on Twitter

“I’ve been asked how well this [new book] represents current science. It correctly says emissions from current worldwide policies could lead to 4C global warming this century, with potentially dire consequences. Yes, I do find it frightening. But it’s still avoidable if emissions reduce soon.” @richardabetts, Professor Richard Betts, Chair of Climate Impacts at the University of Exeter and Head of Climate Impacts at the Met Office Hadley Centre, on Twitter

“Dear School Teachers. Here is the *ultimate guide* on the Climate and Ecological Emergency. Get informed / share the facts / use the terminology.” @geography_paul, Radical Geographer and Social and Environmental Activist, on Twitter

“[This] primer on the climate and ecological emergencies is really, really important reading.” @KetanJ0, Ketan Joshi, Climate and clean tech author and analyst, on Twitter

“An amazing document! – a clear, accessible and peer-reviewed overview of the science of the planetary emergency.” @CharlieJGardner, Dr Charlie Gardner, Lecturer in Conservation Science at the Durrell Institute of Conservation and Ecology at the University of Kent, on Twitter

Dr Emily Grossman is an internationally acclaimed science author, public speaker and TV personality, with a double first in Natural Sciences from Queens’ College Cambridge and PhD in Cancer Research. She is best known as a resident science expert on Sky1’s Duck Quacks Don’t Echo and ITV’s The Alan Titchmarsh Show, and for her inspirational talks in schools, universities and at live events such as The Science Museum, The Hay Festival and Cheltenham Science Festival. Emily is a passionate advocate for equality and diversity in science and has delivered a TEDx talk on Why Science Needs People Who Cry. She was recently named as the second Honorary STEM Ambassador (Science, Technology, Engineering and Mathematics), alongside astronaut Tim Peake, for her pioneering work in STEM education and as a role model to young people.She was also a member of the Bank of England Expert Advisory Panel, who were responsible for selecting Alan Turing to be the face of the new polymer £50 note, is the author of “Brain-Fizzing Facts: Awesome Science Questions Answered”, published by Bloomsbury in August 2019, and is a co-founder of the group Scientists for Extinction Rebellion, whose Declaration Statement has been signed by more than 1,700 scientists across the globe.

Lead author/editor of the Emergency on Planet Earth book:

And with the support of the XR Scientists community

Please note: Individuals credited contributed to the ‘Emergency on Planet Earth’ book in a personal capacity, not as part of their role in the institution(s) listed.