Take the Science Oath for Climate 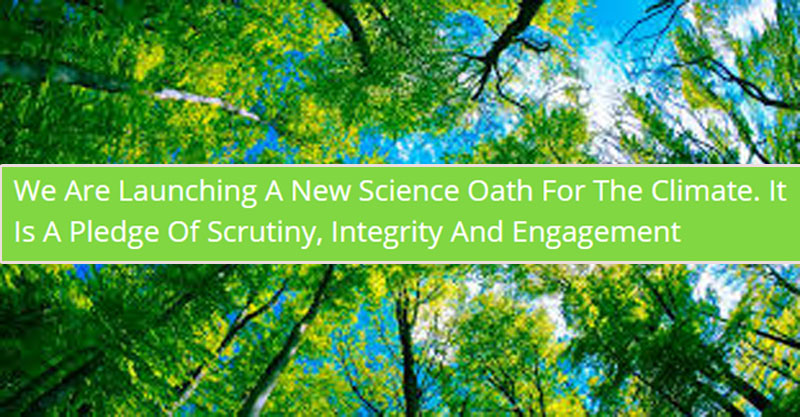 THE LETTER: A Science Oath for the Climate
Professor Chris Rapley (a member of the Scientists’ Warning Advisory Board) and colleagues Bill McGuire, Sarah Bracking, Simon Lewis and Jonathan Bamber are inviting people across the scientific community to join a pledge to prevent catastrophic climate disruption.

The increasing severity of the climatological crisis and the need for action that goes beyond election cycles and business as usual is now very clear to anyone that is paying attention. Therefore, these scientists are launching a new science oath for the climate. It is a pledge of scrutiny, integrity and engagement, and fellow scientists and researchers are invited to join.

Why Do We Need a Science Oath?
According to Scientists for Global Responsibility (SGR), “the oath is designed for scientists, engineers and academics to demonstrate their commitment to speaking out about the scale of the threat shown by the scientific evidence, and the consequent speed and scope of necessary action – despite the often politically challenging conclusions that they lead to.” In order to lead the way toward both individual and system change, signatories that make this pledge are committing to take action to reduce their own pollution and to lobby their affiliates and sponsors to do so with them.

Further SGR says, “the concern is also that there has been self-censorship in the climate science community, with some things said in private that are not said in public. […] We are concerned that not enough is being said in public about many climate scientists’ private worries.”

An Ethical and Moral Obligation to Mitigate Worst Outcomes
Scientists and researchers who devote their entire lives to advancing human knowledge and communicating it to others have an ethical and moral obligation to educate others on how to take the right actions that will be necessary to curtail or mitigate worst outcomes whenever, and wherever possible.

Researchers are called more than ever before in our recent history, to extend their studies on the climate crisis into the public and private sectors and to actually discuss ways we may face the sixth mass extinction event already underway in their reporting. When Scientists and researchers take the scientists’ oath, they pledge and commit to tell the unvarnished truth and present the facts as they with uncompromising public statements explaining how dire the situation we as a global society find ourselves in actually is.

The Two UK-based groups, Scientists for Global Responsibility and the Rapid Transition Alliance (which helps to fund the Climate News Network) backing this, are now urging climate scientists and researchers to present their findings with full ethical disclosure. This entails reporting not just what their evidence shows, but what it actually requires from them and from the rest of us in our personal lives, coupled with a demand for a matching responses from employers and governments. This is based upon the Hippocratic oath, an ethical code designed to guide all professional conduct.

Hippocrates was honoured as the first doctor to distinguish medicine from superstition − no bad example for those working today to convince a hesitant world that there is a vital difference between climate fact and fiction. − Climate News Network

The first line of the Climate Emergency article is:

“Scientists have a moral obligation to clearly warn humanity of any catastrophic threat and to “tell it like it is.” The pledge is about precisely that.

According to The Guardian:

“Science has no higher purpose than to understand and help maintain the conditions for life to thrive on Earth. We may look beyond our planet with wonder and learn, but this is our only viable home. Our dwelling, though, is critically threatened by the loss of the stable climate that has allowed humanity to flourish. We pledge to act in whatever ways we are able, in our lives and work, to prevent catastrophic climate disruption. To translate this pledge into a force for real change, we will:

Explain honestly, clearly and without compromise, what scientific evidence tells us about the seriousness of the climate emergency.

Not second guess what might seem politically or economically pragmatic when describing the scale and time-frame of action needed to deliver the 1.5C and 2C commitments, specified in the Paris climate agreement. And to speak out about what is not compatible with the commitments, or is likely to undermine them.

To the best of our abilities, and mindful of the urgent need for systemic change, seek to align our own behavior with the climate targets, and reduce our own personal carbon emissions to demonstrate the possibilities for change.

With courtesy and firmness, we will hold our professional associations, institutions and employers to these same standards, and invite our colleagues across the scientific community to sign, act on and share this pledge.”

Chris Rapley, is well-known for his work in Antarctica and in the communication of climate science. Professor Rapley recently told the Climate News Network: “The climate crisis is unfolding before us. Our ability to retain some control of our climate destiny is slipping away. The climate science community has a duty to speak what it knows in the hope of evoking the necessary scale and pace of societal response. The oath commits us to doing so.”

The Executive Director of Scientists’ Warning, Dr. Alison Green, has also signed. To see the full list of those who have already signed the science oath − and to add your name − click here. Also, join the scientists warning humanity here.

This news first appeared at The Guardian.