Professor Bill McGuire on The Hazards of Geoengineering 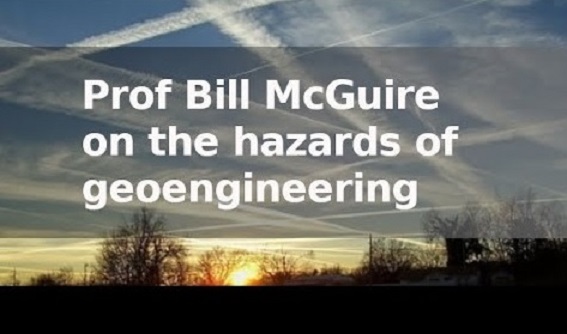 Scientists’ Warning Foundation, Scientific Advisory Board member Bill McGuire recently sat down with Dr. Alison Green to discuss the hazards of geoengineering as well as several other fascinating topics. In this latest interview from ScientistsWarning.TV, Professor McGuire and Dr. Green talk about the need for scientists to speak up about the climate and ecological crisis, about geoengineering – what it is and why we should care – and his new novel, ‘Skyseed’, a terrifying yet realistic tale of geoengineering gone wrong.

Bill McGuire is an academic, blogger, broadcaster, activist and Amazon UK Top 100 popular science and speculative fiction writer. He is currently Professor Emeritus of Geophysical and Climate Hazards at University College London, a co-director of the New Weather Institute, and a patron of Scientists for Global Responsibility.

His books include: A Guide to the End of the World: Everything you Never Wanted to Know; Surviving Armageddon: Solutions for a Threatened Planet; and Seven Years to Save the Planet. His current non-fiction book is Waking the Giant: How a Changing Climate Triggers Earthquakes, Tsunamis and Volcanoes; ranked at number five in The Guardian’s Top 10 ‘eco’ books. His debut novel, Skyseed – an eco-thriller about climate engineering gone wrong – is published by The Book Guild.

Bill is a volcanologist by inclination and training. In 1996, he was a Senior Scientist at the Montserrat Volcano Observatory and in 2010 a member of the Science Advisory Group in Emergencies (SAGE) addressing the Icelandic volcanic ash problem. He was a member of the UK Government Natural Hazard Working Group established in January 2005, in the wake of the Indian Ocean tsunami, and a co-author of its report: The Role of Science in Natural Hazard Assessment. His later work focused on climate change and its impacts, particularly upon the solid Earth, and he was a contributor to the 2012 IPCC report on climate change and extreme events.

From Dr. Alison Green about this interview:
“Idioms and adages generally have longevity because they resonate with us. In this conversation with Professor Bill McGuire, a volcanologist and expert on climate hazards, we talk about geoengineering in the context of risk and potential unforeseen consequences. ‘Be careful what you wish for’ seems an apt idiom for such a situation. I also discuss with Bill the importance of scientists speaking up, and speaking their truth with urgency. It’s important to remember that those IPCC scenarios depend to varying degrees on carbon capture at scale. While the ‘intention-behavour’ gap – such as that between pledges and fossil fuel production – remains wide, we risk finding ourselves in uncharted territory, with a series of unappealing gambles before us. Bill’s novel, ‘Skyseed’, explores what that just might entail. It’s terrifying.”

In this video interview, Dr. Green discusses a newly published article by Naomi Oreskes and other scientists. According to Dr. Green, “it’s an interesting article that makes the point that the public expect scientists to get off the fence and to take a position with regard to policy and importantly, that scientists doing so are seen as being less objective (as you’d expect), but they are still trusted.”

“On the one hand, as scientists we are ethically bound to the scientific method, in effect promising to tell the truth, the whole truth, and nothing but — which means that we must include all the doubts, the caveats, the ifs, ands, and buts. On the other hand, we are not just scientists but human beings as well. And like most people we’d like to see the world a better place, which in this context translates into our working to reduce the risk of potentially disastrous climatic change. To do that we need to get some broad-based support, to capture the public’s imagination. That, of course, entails getting loads of media coverage. So we have to offer up scary scenarios, make simplified, dramatic statements, and make little mention of any doubts we might have. This ‘double ethical bind’ we frequently find ourselves in cannot be solved by any formula. Each of us has to decide what the right balance is between being effective and being honest. I hope that means being both.”

More great discussion is included in the interview. Everyone is invited to watch and comment. Scientists Warning Foundation (SWF) is composed of an award winning team of international volunteers, researchers, scientists, citizen scientists, and activists. SWF is the only recognized and official organization working in collaboration and in cooperation with the Alliance of World Scientists, the authors of the original Scientists’ Warnings to Humanity. If you appreciate this work, please follow us here and on Facebook. Subscribe at ScientistsWarning.TV, share our videos, and sign up to receive the SWF newsletter.