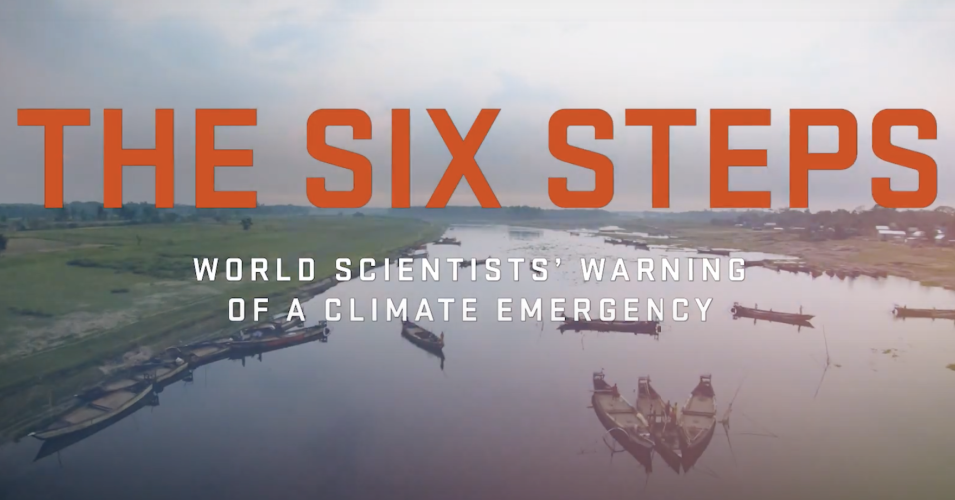 CORVALLIS, Ore. – A year after a global coalition of more than 11,000 scientists declared a climate emergency, Oregon State University researchers who initiated the declaration released an update today that points to a handful of hopeful signs, but shares continued alarm regarding an overall lack of progress in addressing climate risks.

“Young people in more than 3,500 locations around the world have organized to push for urgent action,” said Oregon State University’s William Ripple, who co-authored “The Climate Emergency: 2020 in Review,” published today in Scientific American. “And the Black Lives Matter movement has elevated social injustice and equality to the top of our consciousness.

“Rapid progress in each of the climate action steps we outline is possible if framed from the outset in the context of climate justice – climate change is a deeply moral issue. We desperately need those who face the most severe climate risks to help shape the response.”

One year ago, Ripple, distinguished professor of ecology in the OSU College of Forestry, and Christopher Wolf, a postdoctoral scholar at OSU, co-authored a paper published in BioScience in which more than 11,000 scientists from 153 nations declared a climate emergency. They presented graphics showing trends as vital signs to measure progress and provided a set of mitigation strategies.

Ripple and Wolf teamed up with scientists from Tufts University, the University of Sydney and the University of Cape Town on the Scientific American review, which reports pockets of progress while renewing calls for immediate, widespread action – including a declaration of a climate emergency by the United States and funding for mitigation.

“The climate emergency is here and accelerating more rapidly than most scientists anticipated,” Wolf said. “People are frightened – an illustration of that is the more than 1,800 climate emergency declarations issued around the world, by jurisdictions encompassing more than 820 million people.”

The scientists continue to point to six areas in which humanity should take immediate steps to slow down the effects of a warming planet:

Energy. Implement massive conservation practices; transition from fossil fuels to low-carbon renewables including solar and wind power; eliminate subsidies to fossil fuel companies; and impose carbon fees that are high enough to curtail the use of fossil fuels.

Short-lived pollutants. Swiftly cut emissions of methane, soot, hydrofluorocarbons and other short-lived climate pollutants. Doing so has the potential to reduce the short-term warming trend by more than 50% over the next few decades.

Nature. Restore and protect ecosystems such as forests, grasslands, peatlands, wetlands and mangroves, and allow a larger share of these ecosystems to reach their ecological potential for sequestering atmospheric carbon dioxide, a key greenhouse gas.

Food. Eat more plants and consume fewer animal products. This dietary shift would significantly reduce emissions of methane and other greenhouse gases and free up agricultural lands for growing human food rather than livestock feed. Reducing food waste is also critical – the scientists say at least one-third of all food produced ends up as garbage.

Economy. Convert the economy to one that is carbon free to address human dependence on the biosphere and shift goals away from the growth of gross domestic product at any cost. Curb exploitation of ecosystems for profit to maintain long-term biosphere sustainability.

Population. Stabilize a global human population that is increasing by more than 200,000 people a day, using approaches that ensure social and economic justice such as guaranteeing education for young women and the availability of voluntary family planning services.

“The adverse effects of climate change are much worse than had been expected and now threaten both the biosphere and humanity,” Ripple said. “The year 2020, one of the hottest years on record, also saw extraordinary fire activity in the western United States and Australia, a Siberian heat wave with record high temperatures exceeding 100 degrees within the Arctic circle, an Atlantic hurricane season resulting in more than $46 billion in damages, and deadly floods and landslides in South Asia that displaced more than 12 million people.”

The year wasn’t without climate action positives, the scientists note. Among them:

The European Union is on track to achieve its emissions reduction goal for 2020 and become carbon neutral by 2050. Other governments have committed to zero net carbon as well, including Japan by 2050 and China by 2060.

President-elect Joe Biden has pledged that the U.S. will rejoin the Paris agreement and proposed a $2 trillion climate plan to phase down use of fossil fuels and making investments within historically disadvantaged communities.

Global meat consumption is projected to decline 3% this year, largely as a result of COVID-19, but also coinciding with the growing popularity of meat substitutes.

“Lockdowns associated with the pandemic resulted in a decrease in CO2 emissions of 7% in 2020 but this reduction is probably not going to be long-lived because there has been no major concurrent shift in the way we produce energy,” Ripple said. “This drop in emissions is a tiny blip compared to the overall buildup of greenhouse gases, which has resulted in all five of the hottest years on record occurring since 2015.”

The scientists note that no major industrialized country is on track to achieve the Paris Agreement target of limiting warming to 1.5 degrees Celsius.

“We’re at the point of needing a massive-scale mobilization to address the climate crisis,” Wolf said.

“A year ago, we were worried about poor progress on mitigating climate change. Now we are alarmed by the failure of sufficient progress in 2020. But aggressive, transformative change, framed against the backdrop of social justice, can ignite an enormous deployment that will let us avert the worst of the climate emergency.”

A short video discussion by the AWS thought leaders on the Six Steps is now available (see below).

About the OSU College of Forestry:
For a century, the College of Forestry has been a world class center of teaching, learning and research. It offers graduate and undergraduate degree programs in sustaining ecosystems, managing forests and manufacturing wood products; conducts basic and applied research on the nature and use of forests; and operates more than 15,000 acres of college forests.

This news release is also available online from: https://today.oregonstate.edu/news