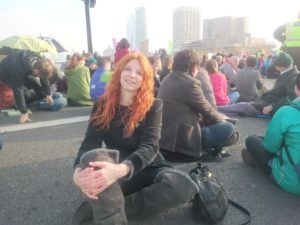 Once upon a time, before I became Executive Director of Scientists Warning, I was an academic, a cognitive psychologist with a successful career. I had recently landed a job I loved – Pro Vice-Chancellor working within a university – and had great colleagues. And I was also becoming increasingly aware of the climate crisis: the year on year rise in atmospheric CO2 levels, the loss of biodiversity, the increasing frequency of extreme weather events and the loss of Arctic sea ice. At the end of 2018, I chose to leave my career behind and I resigned. In this article, I talk about what motivated my decision and what I have learned in the intervening period.

The Summer of 2018 was unlike any other I had experienced. We saw temperatures hover around 30⁰ C for what felt like weeks in England. Rainfall was so scarce that trees and shrubs died back. Seeds I planted at my parched allotment did not germinate. Sections of road melted. This was not normal. Far from it. That summer in England was declared at the time by the Met Office as the hottest on record.

A year previously, I had taken some time to examine in some depth the research on climate science. I knew the situation was bad, that we were losing species every day, but I hadn’t really internalised it all – reading the words is not the same as feeling their imagined consequences. Then one day, it hit me – an intense, sensory experience in which I was witnessing the death of thousands upon thousands of creatures around the globe. It was as if my mind was reprogrammed in an instant. Nothing has been the same since.

The aftershock of the experience – the overwhelming sense of the vulnerability of all life, my own included – pressed down on me unbearably for months. I was traumatised. My mind would awaken me in the early hours and I would be instantly filled with an existential fear that rendered each day dark and somber. Even the clouds seemed to bear down on me. I stopped reading the climate science and stopped watching videos of environmental breakdown. I wanted it all to not be true. Not wanting something to be true is of course at the heart of denial, and why some turn back or look away at this point.

I didn’t look away though, nor did I turn back. Instead, I embraced the fear and the uncertainty, and looked to nature for comfort and solace. Somehow, those conversations with myself on my way to and from work helped me to reach an equilibrium, a deeper understanding of life, and of our existence on this beautiful planet. Watching the glorious sunrises and sunsets offered relief from my inner turmoil and helped me to merge with a magnificent and wondrous system, a system that we may never fully understand. Perhaps we do not need to understand it? Perhaps the gift of our being able to experience it is sufficient?

The existential fear ebbed away and gave way to a deep appreciation of the experience of being alive, and being a part of this fascinating, complex and incomprehensible Universe. The transformation I experienced is irreversible I am sure. With it came a profound sense of love for life, and a realisation, and acceptance, of our responsibilities as stewards of this planet. And an awareness that time is quickly running out.

The science is clear, and the time to act is now. This IS an emergency. Surreal Summer finally acquiesced to Autumn and the IPCC report in October (and the British Government’s abject failure to take proportionate action) was the final straw that persuaded me that I had to do something. Nothing was working. I went looking and I found Scientists Warning and Extinction Rebellion, and quickly found my tribe.

In October of 2018, I co-wrote the first of several press letters with Rupert Read and Richard House. We found 100 academics willing to sign a letter stating that “Facts about our ecological crisis are incontrovertible. We must take action.” That letter rapidly gained publicity. It was notable that usually reticent academics across a broad range of disciplines – not just climate science – were sufficiently concerned that they wanted to endorse Extinction Rebellion, a movement that at that time was still in its infancy and was considered very radical.

I felt compelled to do everything I could to get the message across – that we needed urgent action – to people from all walks of life. I started taking part in Extinction Rebellion actions, an experience that was a first for me. I suddenly found myself in the press, from the Financial Times to the Guardian, from the Huffington Post to an article in Country Life. I was filmed for documentaries and gave talks around the world, not about cognitive psychology, but about the psychological aspects of climate crisis, and why higher education must rapidly evolve.

In November of 2018, I followed both my head and my heart, and I resigned from my post. My career was neither meaningful nor relevant to me at that point. It was a strange realisation, to have achieved what I set out to do only to then find that my values, priorities and goals had shifted. I’m very aware that I was fortunate to be able to make such a gesture, and to exercise privilege in that way.

Some might say that it is best to tackle society’s problems from within those organisations and bodies that currently exist, while others disagree, arguing that the system is itself the problem and trying to fix the climate and ecological crisis with the tools made available to us from a broken system cannot work. We see echoes of this in Greta Thunberg’s comments at the World Economic Forum in January 2021:   “We understand that change is complex and doesn’t happen overnight. But you’ve now had more than three decades of blah blah blah. How many more do you need?”

Business as usual is the problem, and therefore cannot be the solution. But what *can* we do? I learned quickly that it’s really important to identify who are the key experts to follow. Like many new environmentalists, I went down some blind alleys and I made mistakes. One mistake I made was to let myself be swayed by overly alarmist discourse. I was not alone and it has been very unfortunate that some movements have been adversely affected by publicly making some extreme claims. Movements mature though and self-reflection is a useful tool. But one set of beliefs I have encountered seem immune to the usual rational processes, and these are beliefs best summarised in the quote ‘There.Is.Nothing.To.Be.Done.’ It is a position as extreme as it is debilitating, a statement that seems designed to euthanize hope and obliterate agency. While there are undoubtedly some genuine scholars and thinkers in the new field of collapse anticipation, there is a cult-like hardcore of individuals who refuse to consider any science that counters their belief that human extinction is imminent. I experienced this at first hand on social media, and then far more intensely when we republished a critique of ‘deep adaptation’ and interviewed two of the authors. This was a bizarre response in many ways, not least because ‘deep adaptation’ does not advocate near-term human extinction.

The environmental movement is not a cohesive group of people – there are tribes, factions, and specialist groups. Most are well-meaning, and many have a particular focus. Our newest friends at the Word Forest for example are focused on trees, and in particular planting trees in Kenya.

Join us at Scientists Warning to learn more about why the prevailing system is broken, and what leading scientists, academics and innovators believe we need to do.