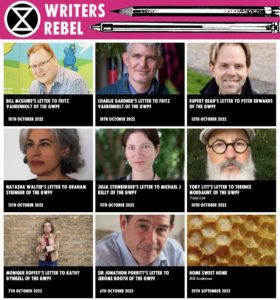 XR Writers Rebel, a group that ‘aims to tell the truth about the climate and ecological emergency‘ now underway involving writers within and without Extinction Rebellion (a.k.a. XR), has recently gathered some of the great unsung heroes of our time to write and speak about the ongoing atrocity of climate denial and the gross negligence that is increasingly becoming the worst crime perpetuated against humanity in history.

Writers Rebel is taking on the denial of the Global Warming Policy Foundation (GWPF) which has become notorious for it’s climate crimes and accepting money from fossil fuel billionaires. The GWPF’s own stated aims are “to challenge what it calls “extremely damaging and harmful policies” envisaged by governments to mitigate anthropogenic global warming. The GWPF, and some of its prominent members individually, have been characterized as practicing and promoting blatant, open and public climate change denial while profiting from this disaster.

Further, according to Desmog Blog “the Global Warming Policy Foundation (GWPF) is a UK-based think tank founded by former Conservative Chancellor Nigel Lawson with the purpose of

combating what it describes as “extremely damaging and harmful policies” designed to mitigate climate change. The group was established on November 22, 2009, just three days after the first set of “Climategate” emails were released on the University of Tomsk’s server.”

“The avoidance by the GWPF of the process of blind peer review has allowed papers into the public domain where data have been disingenuously cherry picked to support an ideological position rather than for greater understanding. This skewing has often been allowed to stand despite complaints from the original authors and accusations of misrepresentation.”
Read more >>

“The unpopularity of the GWPF as an obstruction to climate action continues to grow. If you maintain your role it is likely to impact any other charities for which you have a similar relationship.”
Read more >>

Rupert Read, a friend of Scientists’ Warning Foundation, an academic, and a former spokesperson for Extinction Rebellion who discussed the climate emergency with Dr. Green last year in this video, is yet another author of an open letter to the GWPF. Dr. Rupert Read writes:

“My feeling is that we are also all ‘guardians of the future’. In fact I wrote a book, Parents for a Future – How loving our children can prevent climate collapse, which is a call to action for present and future generations. It stresses that if we care for our own children (or in my case children of family and friends) we are committed to caring for children far into the future – and, as a result, must act now. I get the feeling that you care and want to secure the future for the next generation and those that hopefully follow.

I know you think the GWPF can be a forum to encourage scrutiny and debate but you will be aware that it is so often called a science denial group that it doesn’t bother refuting that description. I am sure you will also be aware that earlier this year it was called out for accepting money from fossil fuels billionaires.

At present it is also the subject of a charity commission complaint. If that fails the people behind the complaint are likely to take it to court. Are you really prepared to support the GWPF through all this, even at the risk of your own good name?

This is a personal letter hoping to persuade you to step down from your role. But because I believe the climate issue is such a pressing one, it is also going to be published on the Writers Rebel website on Thursday (October 13th). I believe everyone needs to know what the GWPF is and the work it is doing.”
Read more >>

Other authors of open letters to the GWPF include:

Where to find more:

If you find yourself wondering, where are the brave ones who will stand up, speak out, and act to put planet and people before profit? Look no further. They are here.