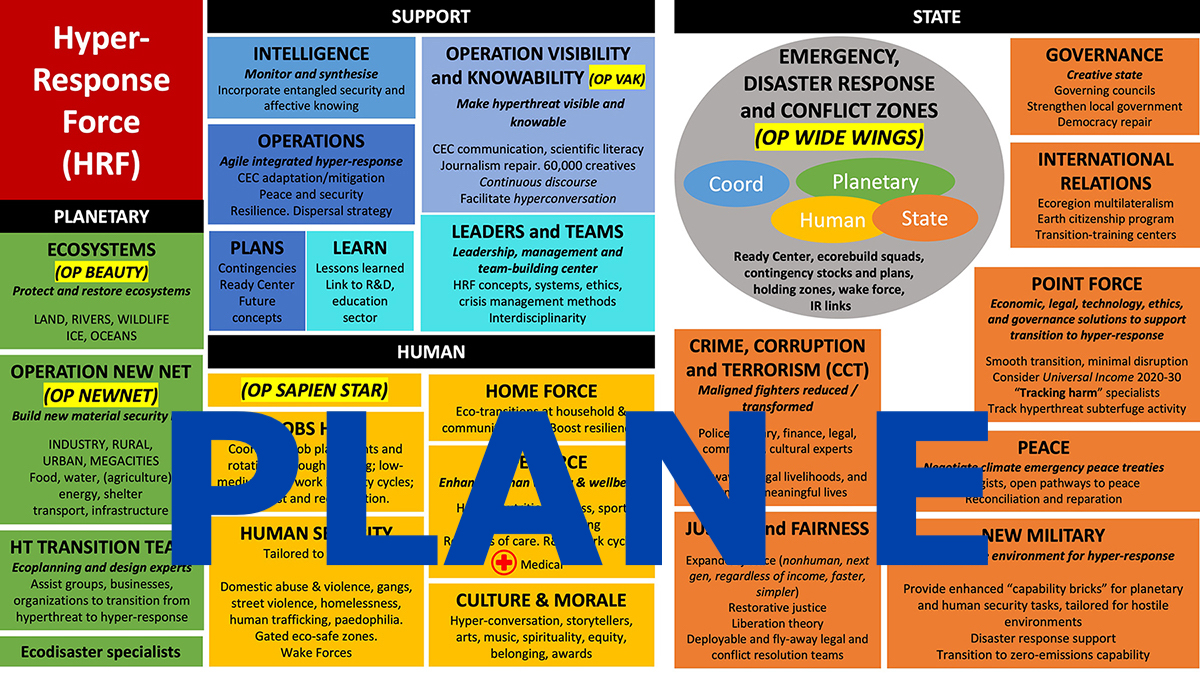 There is wide agreement that the Paris Agreement and subsequent COP meetings, while involving myriads of well-intentioned people, are hitting the hard limits of what is politically possible.

Yet the planet’s climate and ecological stability is also pressing upon more significant biophysical limits.

So, what options do we have?

Reviewed by Counterpunch, a bold new approach is ‘PLAN E’ – a climate and ecologically centred security strategy. It was published by the US Marine Corps University Press in April 2022 in two parts; there is a theoretical and demonstrational component.

The approach proposes that together, global warming and ecological crisis, are not merely economic or science policy issues, but rather, that they constitute a new form of threat – dubbed a hyperthreat. While terms like ‘crisis’ or ‘emergency’ highlight urgency, the hyperthreat notion spotlights the violence, killing, harm and destruction that is imposed through climate and ecological breakdown.

But how does this inform response? Drawing upon theoretical foundations developed by Prussian war theorist General Carl von Clausewitz, PLAN E argues that if the nature of threat has fundamentally changed, so too should humanity’s threat posture. Further, it proposes that humanity’s long history and scholarship in facing dangerous overwhelming threat can be modified and reimagined to suit:

Accordingly, the ‘Hyper-Response’ is envisioned as a civil-led, whole of society mobilisation (not militarisation), which nonetheless has a bottom-up and localisation focus. Along the lines of real options analysis which is designed for decision making in times of deep uncertainty, PLAN E offers an outlier idea on ‘how’ humanity could enact a crisis and fast-tracked response. Like brainstorming, outlier ideas expand conceptual problem-solving space.

The hyperthreat notion also grapples with the issue of culpability. Previously, in a pre-climate era, natural disasters were considered ‘hazards’ – dangerous events that did not involve ‘hostile intent to cause harm.’ In contrast, a ‘threat’ involves a human brain, a consciousness to knowingly cause harm. The improving ability of climate attribution science and insights into deliberate efforts to undermine climate response provide new forms of evidence that need to inform how humanity understand ‘threat.’

In the climate era, old logic on culpability and hostile intent to harm must be reconceived in such a way that allows humanity new mechanisms to protect itself and that which it values. Thus, a threat framing, and greater attention to the new ways in which slow violence occurs, can inform stronger legal responses. Additionally, a security mission potentially has the capacity to override the formidable power of those multi-national corporations inflicting the most harm.

Concurrency – world war and a hyperthreat?

Another key issue a hyperthreat analytical lens draws attention to is the concurrency issue. Over 2023 to 2030, it is impossible for nations to achieve the drastic GHG emission reductions the world needs and concurrently prepare for major warfare or worse, engage in major war. Current global militarisation, costing the world $2 trillion per annum and imposing many other human and opportunity costs, while releasing enormous GHG emissions, undermines planetary and often human security. Aside from fiscal costs, warfare preparation drains human’s research; technical; engineering; intelligence and analytical capabilities leaving less of these valuable assets for effective climate adaptation and mitigation, or a prospective Hyper-Response.

If major warfare broke out, it would likely cause extraordinary harm to fragile ecosystems. For example, laying sea-mines, naval warfare explosions and arrays of new sonar technologies, could hasten the extinction of marine life. If major war did occur between the West and the Rest, the ‘winner’ would face an enraged hyperthreat (dangerous global warming) which would shortly destroy them anyway.

There is also the risk that warfare, proposed as being essential for peace, tips some fragile or failed states over the edge into severe desperation, and if emergent armed groups were to obtain access to nuclear or biological weapons, they could also potentially then become more dangerous, genuine ’enemies.’ When people are pushed to desperation, as has occurred in Haiti, results can be severe. Overall, in military terms, status quo security strategy offers no clear path to victory.

The Hyper-Response involves shifting planning to ‘hyper-time-frames’ to match the scale of the problem, as shown in Figure 1: 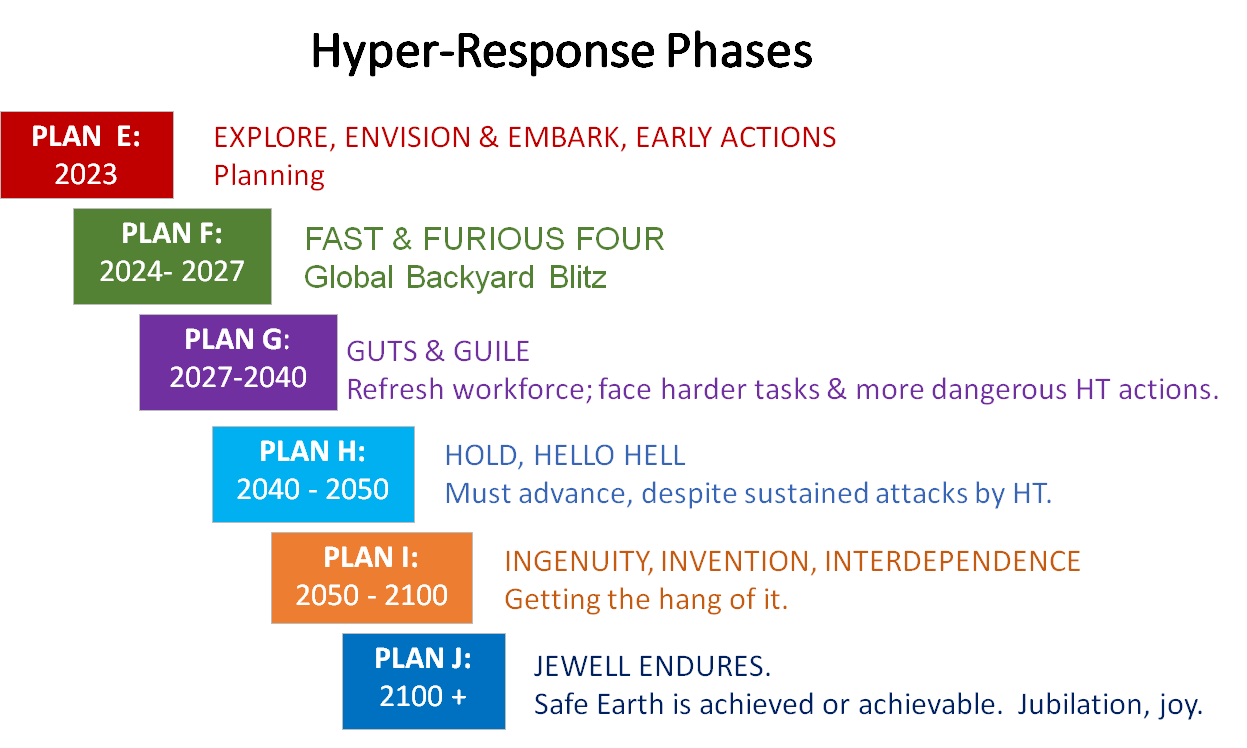 PLAN E, which involves ‘early actions’ but also structured and deliberate planning activity across all levels of society, is envisioned as beginning on Monday 2nd January 2023 and extending for an entire year. This contrasts to the chaotic COP approach which involves top-down policy making; small numbers of people and merely two weeks to discuss, analyse and decide on complex matters. 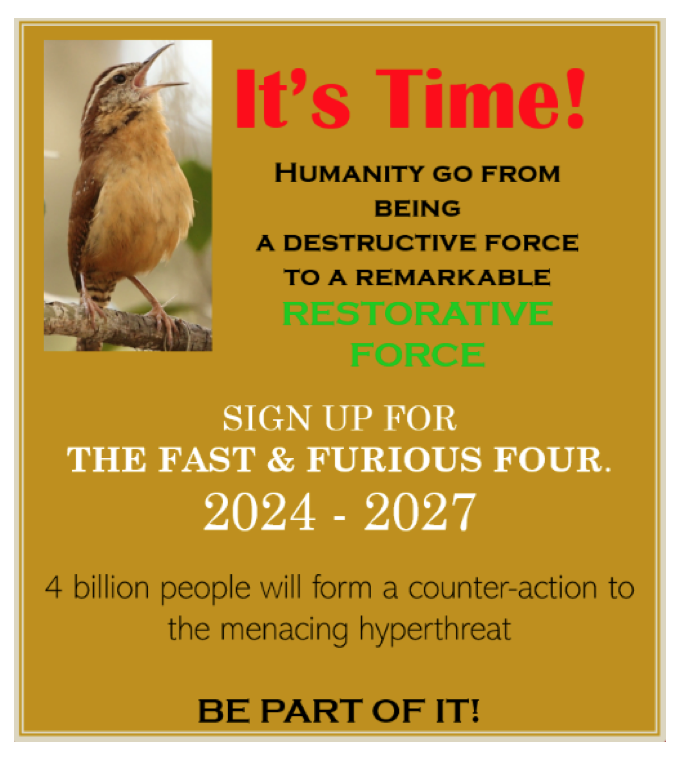 How could a Hyper-Response gain a mandate?

Given the significance of numerous 2022 ‘scientist warnings’ and key events:

the climate and ecological crisis could be referred to the UN Security Council.

A crisis meeting could be called for all nations with an invitation to participate in a ‘Planetary Care Peace Treaty’, to extend for at least ten years, to allow all nations to focus on countering and containing the hyperthreat.

Alternatively, spokespeople from every nation, town and region that has declared a climate emergency or called for a fossil fuel non- proliferation treaty could call their own crisis meeting, and declare an intention for voluntary participation across societal sectors. If PLAN E is socialised with the public, and supported, it might prompt nations to revise their security strategies. Of their own accord, foreign policy or defense departments might initiate contingency planning, so at least there is an option for a crisis response to be presented to the public and quickly enacted.

The research activity which explored the question, ‘what if’ we did treat the climate and ecological crisis as a bone fide threat, revealed that humanity still have unexplored pathways and significant latent capacity for effective response. For this idea to realize its potential, it will require funding and far more minds to look at the problem through a hyperthreat lens. 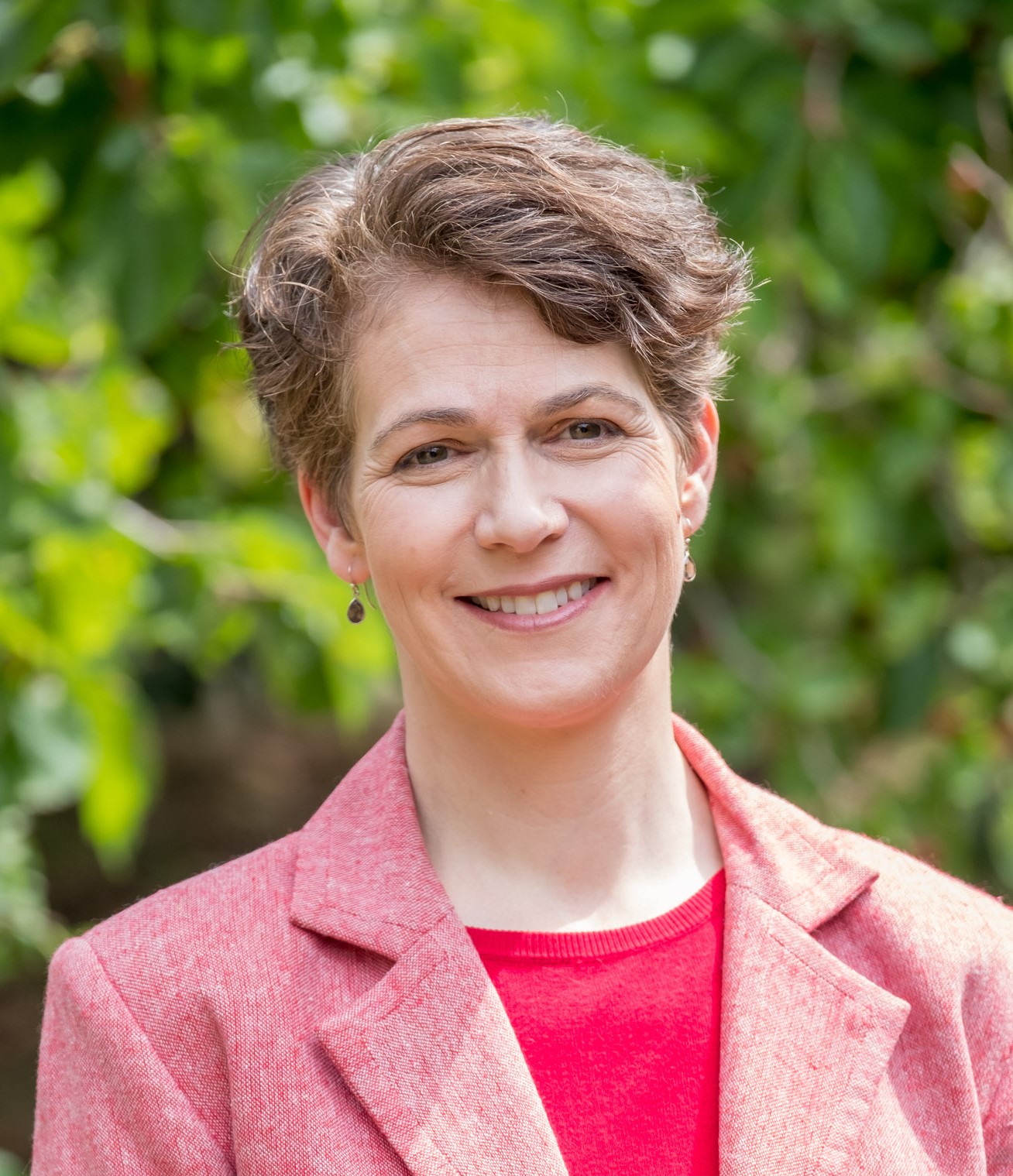